SCENE 2 If it wasn't for the 'ouses in-between

Saffron and Floyd leave Homerton hospital and walk toward a neo-classical building called "Chats Palace". To Saffron's displeasure, Floyd gestures that he is going inside. Saffron waits.
Floyd walks into a darkened auditorium. Under a Spotlight a pianist plays and a Caribbean woman of mixed ancestry wearing classic old time music hall dress moves to the music, waiting to begin.
Floyd approaches, nods appreciatively at the musicians, takes a bunch of flyers from atop the piano and returns outside as the Singer begins to sing old time music hall style

“If it wasn’t for the ‘ouses in between”

This scene will be created as a musical event in February 2019, in collaboration with Randolph Matthews tracing highlights of the musical history of Hackney.
As the song progresses the Hall gradually fills with people of many ages, styles, characters, ethnicities, cultures
Some of the Crowd are at tables, some dancing or standing around.
A few “characters” are established, some are spotlighted
Gradually different “characters” and groups begin to sing or bring out instruments, or to dance..
The Group of Singers and Musicians begins to grow, joining the Singer and Pianist.
The Crowd are part of the Music
The Song remains the same but evolves through many different phases:
the styles of the music and dancing reflect some of the many styles that have been heard/ practiced in Hackney over the years/centuries: e.g: reggae, classical, tabla, troubadour, samba, sabar, soca, jazz, hip-hop, punk, funk, soul, dancehall, klezmer, hipster folkie etc
As the music crescendos certain Performances presenting Music Hall, Lovers Rock, Jazz and Grime become particularly highlighted in a clash/interplay underpinned with a move between strong and various and varied Drum and Dub rhythms

“If it wasn’t for the ‘ouses in between”

If you saw my little backyard
What a pretty spot you'd cry
It's a picture on a sunny summer day
Wiv the turnip tops and cabbages
Wot people doesn't buy
I makes it on a Sunday look all gay
The neighbours' finks I grows 'em
And you'd fancy you're in Kent
Or at Epsom if you gaze into the mews
Its a wonder that the landlord
Doesn't want to raise the rent
Because we've got such nobby, distant views.

Chorus: Oh it really is a werry pretty garden
And Chingford to the Eastward could be seen
Wiv a ladder and some glasses
You could see the 'Ackney Marshes
If it wasn't for the 'ouses in between.

We're as countrified as can be
Wiv a clothes-prop for a tree
The tub-stool makes a rustic little style
Ev'ry time the blooming clock strikes
There's a cuckoo sings to me
And I've painted up “To Leather Lane a mile”
Wiv tomatoes and wiv radishes wot 'adn't any sale
The backyard looks a perffick mass o' bloom
And I've made a little beehive
Wiv some beetles in a pail
And a pitchfork with the handle of a broom.

Chorus: Oh it really is a werry pretty garden
And Rye 'ouse from the Cockcroft could be seen
Where the chickweed man undresses
To bathe 'mong the water cresses
If it wasn't for the 'ouses in between.

There's the bunny shares 'is egg-box
With the cross-eyed cock and hen
Though they 'as got the pip and him the morf
In a dog's 'ouse on the line-post
There was pigeons nine or ten
Till someone took a brick and knocked it off
The dust cart though it seldom comes
Is just like 'arvest 'ome
And we mean to rig a dairy up somehow
Put the donkey in the wash-house
Wiv some imitation 'orns
For we're teaching him to moo just like a cow.

Chorus: Oh it really is a werry pretty garden
And 'Endon to the westward could be seen
And by clinging to the chimbley
You could see across to Wembley
If it wasn't for the 'ouses in between.

Though the gas-works isn't wilets
They improve the rural scene
For mountains they would very nicely pass
There's the mushrooms in the dust hole
With the cowcumbers so green
It only wants a bit of 'ot 'ouse glass
I wear this milkman's nightshirt
And I sits outside all day
Like the plough-boy cove
What's mizzled o'er the Lea
And when I go indoors at night
They dunno what I say
Cause my language gets as yokel as can be.

Chorus: Oh it really is a werry pretty garden
And soap-works from the 'ouse-tops could be seen
If I got a rope and pulley
I'd enjoy the breeze more fully
If it wasn't for the 'ouses in between. 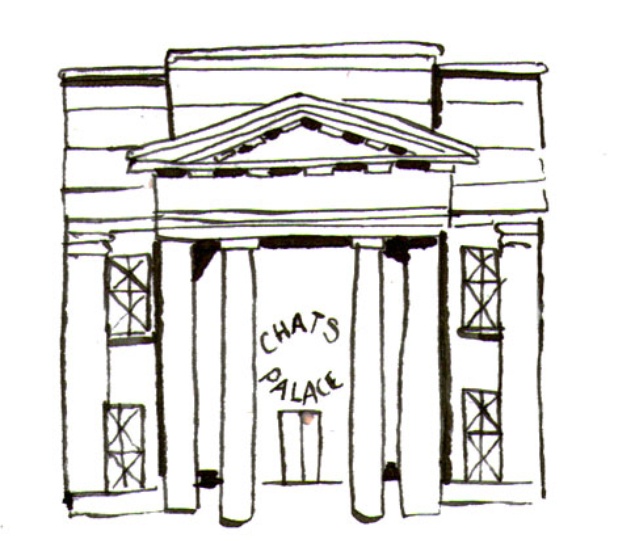